Preakness a better test than Derby

Preakness a better test than Derby 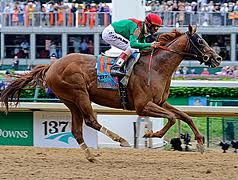 When it comes to crowning horse racing's champions, the Preakness Stakes has turned out to be a more significant factor in recent years than the more prestigious Kentucky Derby, the New York Post reported Friday.

Each of the past 10 Preakness winners, and 13 of the past 14, went on to be named the three-year-old champion at the end of the year (including the filly Rachel Alexandra), though just seven of them won the Derby. Four of those Preakness champions were named Horse of the Year.

The conclusion is obvious: Though the result of the Derby can leave you scratching your head in wonder, the Preakness is almost always won by the best horse.

"We're sorting things out a bit more [by the Preakness]," said legendary trainer D. Wayne Lukas, who owns five Preakness trophies. "You had the preps for the Derby and then the Derby, and the pretenders fall by the wayside by the time we get here. Now we're at the point where you are getting the cream of the crop."

"A lot of the difference [between the two races] is with 20 horses in the Kentucky Derby, there are a lot of bad trips and very few good trips," Stevens said. "Whereas the Preakness with 14 horses, it's a lot easier to maneuver around. The atmosphere is a lot different. Everybody is more settled in at this point, and you get better trips. The Preakness is always won by a legitimate horse."

There's an old saying in racing: If you didn't attend the wedding, don't go to the funeral — meaning that if you did not bet on a horse when he won at long odds, don't bet him back at a short price.

Some will apply that wisdom to Animal Kingdom, who won the Derby at 20-1 and will likely go off as the favorite Saturday. But Animal Kingdom's long odds in Kentucky had more to do with the perception that he was a turf/Polytrack specialist trying dirt for the first time, rather than any lack of talent.

"The Derby winner is always the horse to beat here," said Hall of Fame trainer Bob Baffert, whose five Preakness winners included three that won the Derby. "Usually this is the easiest leg [of the Triple Crown]. When a horse wins the Derby, he's in the zone. He's peaking."

The Preakness will go off at 6:18 p.m. ET Saturday at Baltimore's Pimlico Race Course.
Source:msn.foxsports.com
Posted by admin at 1:18 PM

Email ThisBlogThis!Share to TwitterShare to FacebookShare to Pinterest
Labels: News, Preakness a better test than Derby