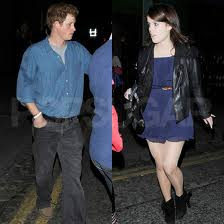 Prince Harry and his cousin Princess Eugenie went out on May 28 to the chic London nightclub Public, and when they emerged at 2:30 a.m., they definitely looked like they had been partying hard all night!

Harry, 26, and Eugenie, 21, were dressed casually and were COVERED with stains from the bar, the Daily Mail reports. Harry’s shirtsleeves were dampened with spilled drinks, and poor Eugenie had spilled all down the front of her blue mini-dress! When they stumbled out, they both looked a little worse-for-wear — we can only imagine the fun they had inside!

Can WE party with them too? They sound like a blast!
Source
Posted by admin at 2:05 PM