Sarko’s father lets cat out of bag: Carla is in the family way 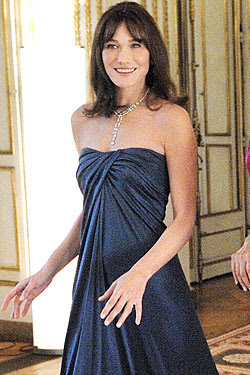 The worst kept secret in French politics was finally revealed Tuesday: President Nicolas Sarkozy will run for re-election alongside a pregnant Carla Bruni. While the Elysee Palace is still refusing to comment on the First Couple’s private life, the president’s father Pal Sarkozy spilled the beans to Germany’s mass market daily Bild.

“I’m glad to be having a grandchild,” the 82-year-old reportedly said, adding that neither the president nor his wife “want to know the sex of the child, but I’m sure it’s a girl who’ll be as beautiful as Carla.” Contacted by AFP, the Hungarian-born painter refused to comment or confirm his statement, but in any case Bruni’s pregnancy has become an open secret. When the 43-year-old singer appeared on television Monday to promote her adult literacy charity her interviewer said: “I know you don’t like people talking about your private life, but I just want to congratulate you.”

Bruni giggled playfully and replied: “I congratulate you too.” The elegant former model has not been seen for a while in figure-hugging fashion, and last month told well-wishers at a meeting that her “lips were sealed” .
Posted by admin at 8:30 AM