Snooki taken into custody in Italy 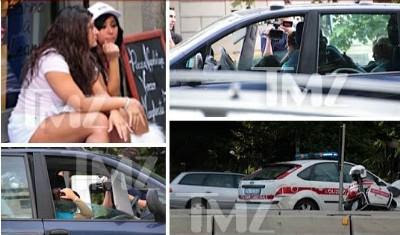 Jersey Shore star Nicole ‘Snooki’ Polizzi has been “taken into custody” in Florence, Italy after crashing into a police car.

Witnesses at the scene and show insiders have told TMZ that there’s no question Snooki had been drinking, and nobody was injured in the crash.

One eye witness told TMZ that Snooki ran into the back of the police car, and wedged her car between the police vehicle and a wall.


However, she had to be assisted to exit her car via a window as the driver’s and passenger’s doors were both blocked.
E! Online also reported on the incident, and they add that the police car was in fact a “safety escort” for the Jersey Shore stars.

Deena Nicole Cortese was in the passenger seat of the car Snooki was driving, and though both were unhurt, both were taken into custody while the details of the incident were sorted out.

E! adds, “The officers were treated for whiplash and minor cuts and bruises” while both Snooki and Deena refused any medical attention.
Source:unrealityshout.com/
Posted by admin at 11:14 AM

Email ThisBlogThis!Share to TwitterShare to FacebookShare to Pinterest
Labels: News, Snooki taken into custody in Italy