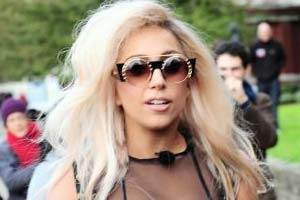 The pop superstar launched her second series of live concerts in 2009 and has spent two years touring the show.

She previously admitted her lavish stage sets and production costs left her bankrupt and she has now revealed she was struggling with a massive multi-million dollar debt.

In an interview with Stephen Fry for Britain's Financial Times, Gaga says, "I put everything in the show, and I actually went bankrupt after the first extension of The Monster Ball. And it was funny because I didn't know! And I remember I called everybody and said, 'Why is everyone saying I have no money? This is ridiculous, I have five number one singles' - and they said, 'Well, you're $3 million in debt.'"
Source
Posted by admin at 8:31 AM