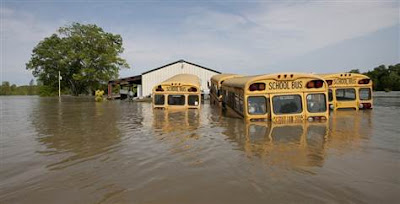 The final wave of holdouts has mostly packed up and left this town as water from the swollen Atchafalaya River inched toward their homes, their frustration and hope painted on signs outside their now-abandoned homes.

"Nothing left worth stealing," read one. "Stay strong. Believe," urged another. "Our hearts are broken, but our spirits are not. We will come HOME," are the words Kip and Gwen Bacquet spray-painted on the plastic liner that covers the entire first floor of their house.

Most had left Butte LaRose days earlier amid high tension as the water continued its dayslong trek toward the area. St. Martin Parish had ordered a mandatory evacuation to take effect Saturday, but then pushed it back at least two days after officials said the river would crest May 27 at a lower level than previously thought.

The delayed evacuation is likely to be a source of both optimism and further frustration for folks who have heard the same grim forecast for days on end. Once the water comes, residents may not be able to return for weeks. They'll have to wait until Monday for officials to decide whether to reinstate the evacuation order.

"It's probably a blessing for some because maybe some people who didn't have time to do additional sandbagging will now have more time," said Maj. Ginny Higgins, a spokeswoman for the St. Martin's Parish sheriff's office.

The couple moved here last summer for a change of pace from their native Lafayette, a city of about 120,000 some 60 miles west of Baton Rouge. The Bacquets savored their final hours before evacuating by lounging on the deck overlooking the canal in their backyard, sharing a few bittersweet laughs with two friends who came to help.

Before leaving town, they planned for their last act: shutting off the electricity.

"Would the last people to leave Butte LaRose please turn out the lights?" Kip Bacquet joked.

Farther up the Atchafalaya River, St. Landry Parish imposed a mandatory evacuation last Sunday for several areas outside the ring levees protecting Krotz Springs and Melville. Hundreds of homes in all the evacuated areas are believed to be at risk of flooding.

Earlier forecasts had called for floodwaters to reach Butte LaRose less than two days after the Army Corps of Engineers opened the Morganza floodway, north of Baton Rouge. The corps partially opened that floodway last Saturday, but the water it was diverting from the Mississippi River into the Atchafalaya Basin still hadn't reached the town nearly a week later.

The wait has been agonizing for Michelle McInnis, 37, who was preparing to leave town Friday after 10 days of packing up the camp she shares with her boyfriend, Todd Broussard. She calls the National Weather Service every morning and uses the agency's measurements to chart the slowly rising water's progress on a calendar.

McInnis, 37, was living in Sulphur, in southwest Louisiana, when Hurricane Rita wiped out her home in 2005. In some ways, she said, the threat from the rising river is tougher to endure than the fury of a hurricane.

"The waiting game is worse," she said. "This right now is mentally tormenting, this slow rising,"

In Vicksburg, Miss., residents are waiting for the water to finally recede. On Saturday, Chris Lynn fired up his small aluminum boat and traveled about a mile to check out his father's house. The home sits on a 15-foot mound of dirt on the Mississippi River's banks, much like an island in the murky water.

"It looks like the water has come down about 2 inches," Lynn said, grabbing his cell phone to call his 73-year-old father with the news. "That's good. The floor is starting to dry out."

Back in Butte LaRose, Tommy Girouard, 57, and his brother, Keith, 53, are hunkering down to ride out the flood on Tommy's 60-foot house boat. Girouard said he is staying to protect his $150,000 investment in the boat.

"It's safe on here," he said. "It shouldn't be a problem. Just tightening and loosening ropes, we should be fine."

The brothers stocked up on 400 gallons of gas and bought enough food to last two months.

"How many boxes of fudge-icles? Eight boxes?" he asked his brother.

Sheriff's deputies and National Guard troops knocked on his door Thursday, warning him about the evacuation that has since been lifted and telling him to sign a form that says he understands the risks of staying.

"Didn't read it. Wasn't interested," Girouard said. "I can't just walk away from this."

The brothers parked a car and left a boat and two canoes on the other side of a levee. They hope to be able to come and go if need be.
Source:
Posted by admin at 1:11 PM