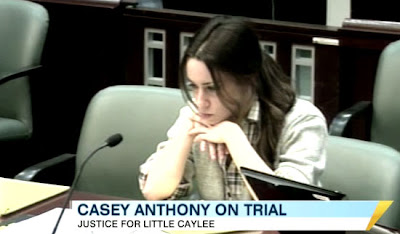 Casey Anthony trial begins. While it may be difficult to accept that a mother could kill her own child, prosecutors in the Casey Anthony murder trial told jurors Tuesday, there is no other conclusion that can be drawn, based on the evidence.
Anthony is accused of killing her 2-year-old daughter Caylee in 2008 and lying about it to investigators. The Orlando trial, which comes after nearly three years of legal twists, turns and delays, has garnered interest nationwide.

Prosecutor Linda Drane Burdick painted a damning picture of Anthony in her opening statement, which stretched to nearly two and a half hours. Defense attorneys were set to begin their statements following a lunch break.

"No one but Casey Anthony had access to all the pieces of evidence in this case," Burdick said. "... No one else lied to their friends, to their family, to investigators. No one else benefited from the death of Caylee Marie Anthony. Caylee's death allowed Casey Anthony to live the good life -- at least for 31 days."

Anthony has pleaded not guilty, and denies harming her daughter or having anything to do with her disappearance. One of her defense attorneys, Jose Baez, has said that once all the facts are known, it will become clear his client is innocent.

In addition to capital murder, Anthony faces six other charges, including aggravated child abuse, aggravated manslaughter of a child and providing false information to authorities. If she is convicted by jurors -- seven women, five men and five alternates -- she could face the death penalty.

Now 25, Anthony wore a loose-fitting white shirt for the first day of her trial. Her hair was pulled back in a ponytail. She became emotional at times during Burdick's statement, at one point pressing a tissue to her face in an effort to stifle sobs, but stared stonily ahead at other times, occasionally shaking her head.

Anthony, who was 19 when her daughter was born, "appeared to all outward observers to be what her parents thought she was -- a loving mother working hard to provide support for her daughter," Burdick said. "But as the evidence in this case and the investigation into the background of Casey Anthony will show, that was an illusion." Anthony's parents thought she had returned to her job at Universal Studios after maternity leave, Burdick said, and indeed she dressed daily in work clothes and had a Universal Studios ID, but went "who knows where."

Caylee visited her great-grandfather on June 15, 2008 -- Father's Day -- and a photograph was taken of the two together, Burdick said.

"The next time a photograph was taken of Caylee Anthony is on December 11 of 2008, (when her skeletal remains were found)," Burdick said as Anthony frowned, shook her head and wiped tears off her cheeks.

Burdick took jurors through that 31-day period before the little girl was reported missing, detailing Anthony's lies to her friends and her increasingly frantic parents, George and Cindy Anthony, regarding Caylee's whereabouts. She also talked about Anthony's getting a tattoo during that time -- "Bella Vita," Italian for "beautiful life" -- and referenced photographs of her partying at local clubs.

In addition, she told jurors they would hear in detail about evidence including a stain in Anthony's car trunk and the odor of human decomposition emanating from it, as well as her misleading statements to authorities during the investigation into Caylee's disappearance.

Prosecutors allege Anthony used chloroform -- evidence of which was found in her car trunk by technicians -- on the little girl before putting three pieces of duct tape over her mouth and nose, cutting off her air supply. They allege she then stashed the body in the trunk of her Pontiac Sunfire before disposing of it.

A cadaver dog alerted to the presence of human decomposition in the trunk, Burdick said, and a scientist will testify that air samples from the trunk were also similar in chemical composition to human decomposition. A search of a computer in the Anthony home showed that someone had searched on chloroform and how to make it, along with other searches.

Anthony explained the odor by saying there was a dead animal caught in the frame of the car, Burdick said. She eventually abandoned it, saying it had problems and had run out of gas. On June 30, it was towed to a wrecker yard, where it stayed until July 15, when Anthony's parents picked it up and drove it home.

Anthony's high-powered defense team will likely try to cast doubt on prosecutors' scientific evidence. At pretrial hearings, they have argued that evidence regarding a potential odor of decomposition in the trunk, chloroform and other evidence is not reliable enough for jurors to consider.

At 5 a.m., more than 30 potential spectators were lined up to get tickets to get inside the courtroom, according to In Session producer Nancy Leung. In an hour, that number had swelled to more than 50 -- with a full three hours to go before court began.

One woman said she took time off from her job in Chicago and bought a last-minute ticket to be at the trial. Another woman planned her vacation around opening statements, and a third, from England, happened to be in town for a wedding and decided to come. The first 50 people in line received tickets to get inside.

The jury was seated Friday after the process was moved to Clearwater, Florida, in Pinellas County out of concerns that an impartial jury could not be seated in Orlando, in Orange County, because of the intense media attention surrounding it.

Both the prosecution and the defense face hurdles, said In Session correspondent Jean Casarez, who has followed the case from the beginning.

The cause of Caylee's death was homicide by undetermined means, meaning there is no cause of death, she said. "This is a circumstantial case, so prosecutors will build their building blocks toward that answer, but they don't have a definitive cause of death, and that can be a problem," Casarez said. "I have seen cases where there are acquittals because the prosecution does not have a cause of death."

Duct tape was still stuck to the lower facial region of the child's body, authorities have said. Burdick told jurors Tuesday it was placed there before decomposition, as it was holding the jawbone in place.

Authorities have said that the amount of decomposition would seem to indicate Caylee died shortly after she went missing.

The car and the evidence it contains presents a huge hurdle for the defense, but perhaps their biggest obstacle to overcome is the 31-day period in which Anthony failed to report her daughter missing, Casarez said.

Early in the jury selection process, defense attorneys hinted that mitigating circumstances including "a history of sexual abuse" may have explained Anthony's behavior in the days after her daughter disappeared and her failure to alert authorities sooner. Anthony herself told police she had been trying to find her daughter on her own.

Defense attorney Ann Finnell raised a host of potential mitigating circumstances to gauge what would-be jurors might consider if they had to decide whether to sentence Anthony to death. Those circumstances included a "lack of maturity," "lack of impulse control" and "a history of sexual abuse."

Anthony alleged her father and brother sexually abused her in a letter from jail last year. In an interview with NBC News afterward, her father, George Anthony, denied the claims and criticized Baez's judgment in questioning him about the allegations.

Finnell asked potential members of the jury pool whether the assertion her client came from a "dysfunctional family" might factor into their penalty decision.
Posted by admin at 1:00 AM