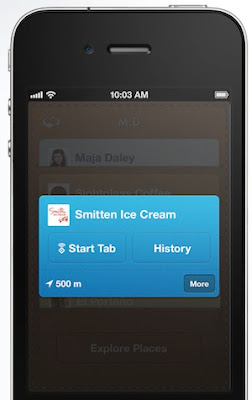 Square Register Card Case. Square recently introduced Card Case, a new app that essentially turns smartphones into digital cash registers at local businesses. Even though it’s very new, one has to ask, can this work?
The idea behind the app seems simple enough: ring up items all on the iPhone’s screen, pay with a saved credit card file and a text message receipt is delivered. Until NFC technology is integrated into most smartphones, apps like this could fill a significant void. Smartphone owners are typically more tech savvy and fond of making the most out of their handhelds. The closest (and probably most successful) app would be the Starbucks app for the iPhone, which is tethered to a gift card account with a credit card on file for automatic refills (of cash, not coffee).

Square’s new app includes a directory local restaurants and cafes (I can almost see a daily deal feature here in the future) along with menus and records of digital receipts. So far, that library of locations is limited to five metropolitan areas: San Francisco, New York City, Los Angeles, St. Louis and Washington D.C. - the last two of which only have one location participating a piece. However, Square promises more locations to be posted in the coming weeks.


On one note, I have to agree - paper receipts are wasteful and almost out of place these days. However, they’re unavoidable, especially with small purchases at places like the local corner store. Yet it’s impossible to see Card Case replacing traditional cash registers. Obviously, not everyone owns an iPhone or Android-based smartphone. Additionally, if there’s a problem with the way the app functions, a store employee needs to be there to solve it.

Furthermore, the process for getting Card Case onto a smartphone seems rather backwards. The three-step process requires consumers to visit a participating retailer and buy something first before Card Case can be downloaded.

Despite these qualms, that doesn’t mean this app doesn’t have a shot at being successful. For frequent visitors of these eateries, it’s incredibly useful. It could also just help streamline business in general, especially during rush hours in the morning and lunchtime. Thus, we’ll just have to wait and see how many businesses that Square can sign onto the project to make it viable enough.
Posted by admin at 1:01 AM